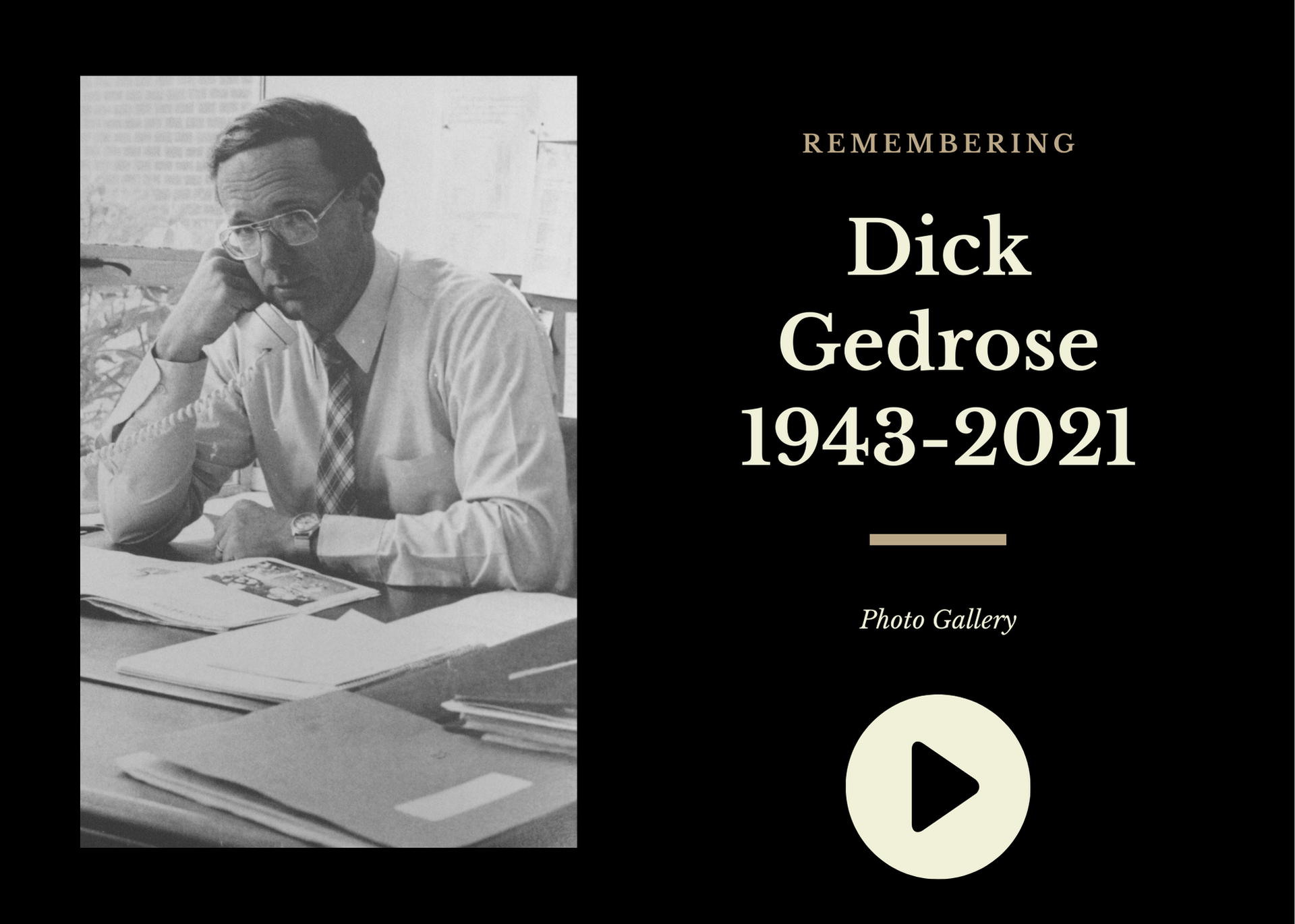 Click the image above to view a photo gallery of memorable moments from Dick Gedrose's time at Jesuit High School.

“A teacher affects eternity; he can never tell where his influence stops.”  The famed 19th century historian Henry Adams’ words capture well the career of Richard (Dick) Gedrose, whose life we celebrated on Tuesday, August 10 with a magnificent funeral Mass at Jesuit, befitting a leader of Dick’s stature.

An alum of the Class of 1961, Dick returned to JHS as history teacher and coach before becoming Jesuit’s Athletic Director, Vice Principal, Principal, and President over the course of a 35-year tenure. Dick was the visionary who, along with Father Bill Hayes, Sandy Satterberg, and a courageous band of Ignatian educators, brought coeducation to Jesuit. Today, we can hardly imagine our school without the young women who have contributed so much to our mission and culture—but the transition to coeducation was a complex endeavor, and Dick was its architect.

At his core, Dick remained a teacher to so many of us during his entire tenure. Recently, I found myself on an email chain with members of the JHS Class of 1973.  Bob Keerins ’73, wrote to his classmates, “Dick was my favorite teacher. Such a good and decent man. I am sure God will welcome him into Heaven!”  Bob’s comment evoked similar sentiments from many of his fellow alums.

I met Dick in 1994, when he hired me to teach English and Journalism at JHS. After Dick’s funeral, as we reminisced and shared “DG” stories, Tom Rothenberger, Erin DeKlotz, and I each observed that none of us would be at Jesuit without Dick, who hired Tom in 1981 and Erin in 1993, the first year of coeducation.

Dick’s leadership still impacts Jesuit High in significant ways. Not only was coeducation a tremendous inflection point at JHS, but the Profile, the Ignatian Paradigm, and our Friday Mass remain pillars on which Jesuit stands, and all three have Dick’s fingerprints all over them. 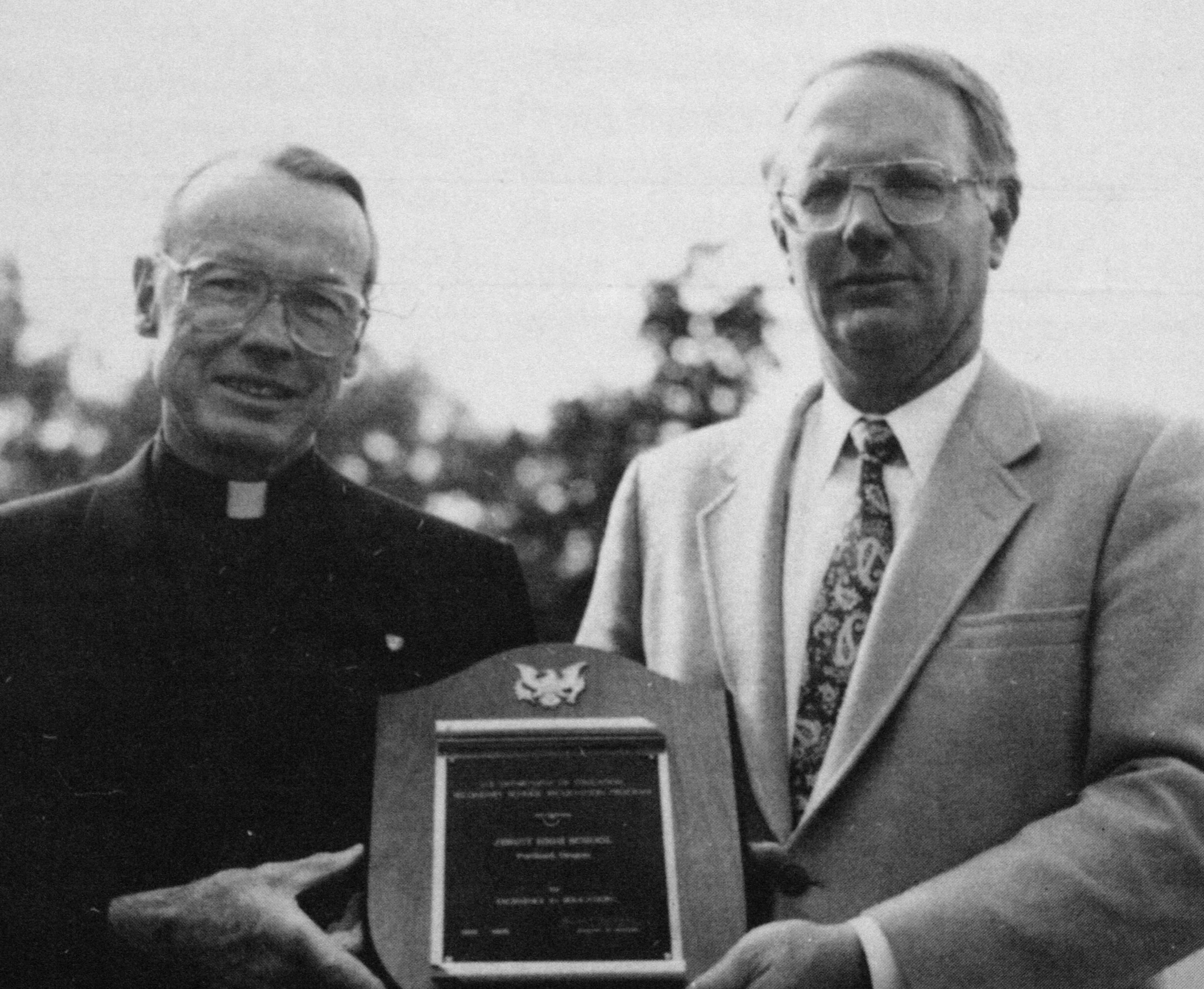 Dick’s influence on generations of students is both very direct (as with Bobby K and friends), and indirect, via those of us he mentored. Though he retired in 2006, Dick hired almost a third of our current faculty and program directors, including Jeff Hall and Elaine Kloser, Don Clarke, Mike Hughes, and about half of our current on-campus teacher/coaches. Counselor and Head Football Coach Ken Potter, who spoke at Dick’s funeral and reminded us that Dick remained at heart a teacher, even as Principal and President of Jesuit.

My own “Mr. Gedrose” story, with a bit of context: Dick was sometimes known as “Say No Dick,” for his determination to guard the school’s resources and reputation carefully. Dick’s caution was formed in the crucible of an early-1980’s financial crisis, when Jesuit almost closed in Dick’s first year as Principal. 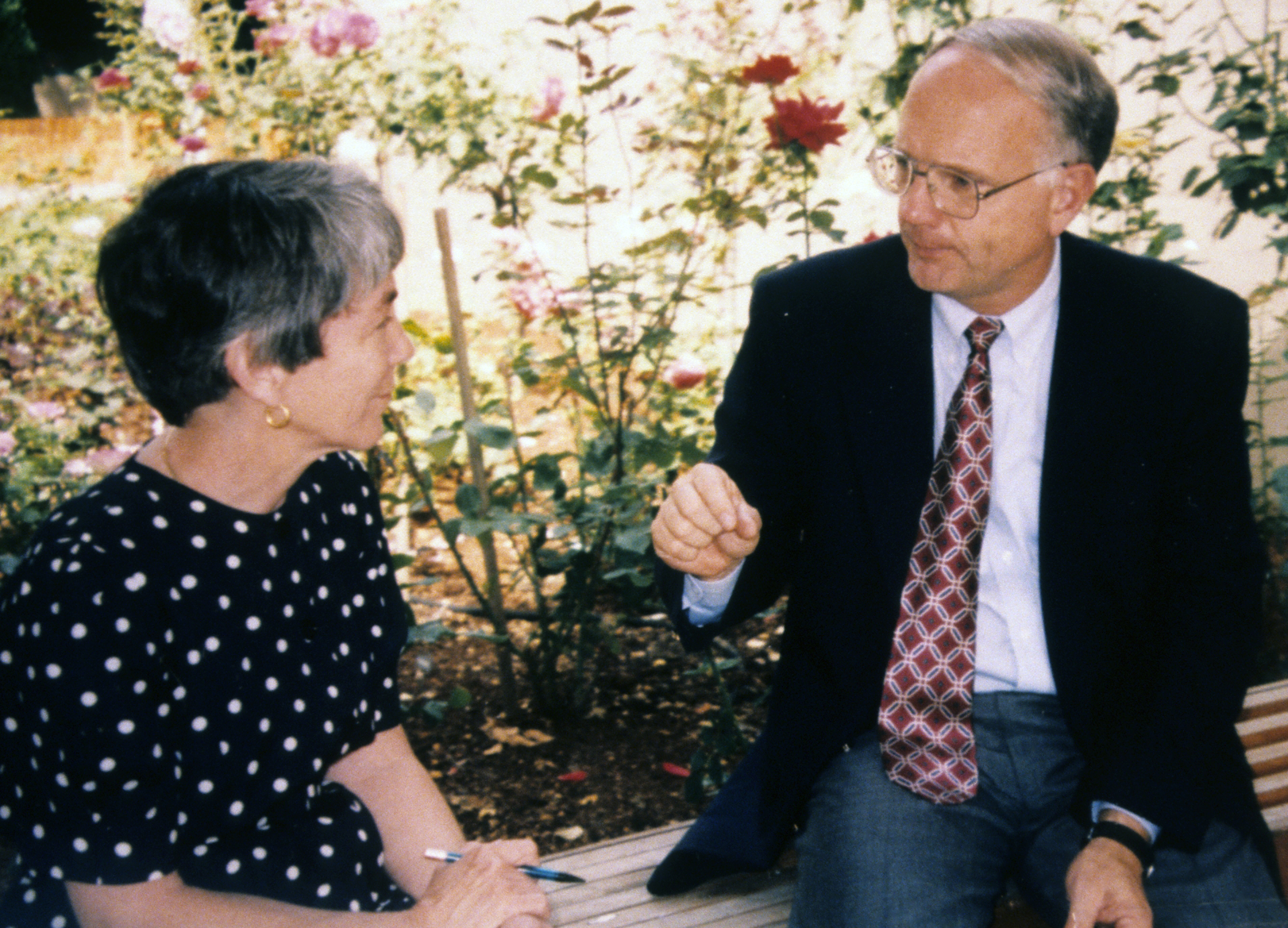 Fast forward (or fall back) to the spring of 1995: the students in my Journalism class wanted to publish an “April Fool’s” edition of the school newspaper. Their idea for the front-page story: “Return to Single-Sex: JHS to be All-Female by 1999” (!). The story spoofed the school’s deliberative transition to coeducation. The ironic premise was that boys were to be carefully phased out of JHS over the next four years.

I took the idea to Dick, who immediately shut it down: “No, Paul. It’s too soon. You have no idea the toll it took to go co-ed, how many battles we fought. Too soon.”  As a new teacher at Jesuit, I of course acceded, and went back to share the news with my disappointed crew of nascent satirists.

About a week later, Dick found me in the hallway and said, “You know, I’ve been thinking about it. Maybe I am taking this all a little too seriously. We could all use a good laugh, and it sounds like the April Fools edition could be a worthy writing exercise. Give it a shot.”

So we went ahead with the story, featuring young JHS teachers Elaine Kloser and Maureen Milton posed outside of Dick’s office, ready to “take over” Jesuit as co-Principals.

Little did we know that two years later, Dick would move to the President’s suite, making room for the amazing Sandy Satterberg to become the first lay female Principal of a Jesuit school in the US. Years later, I realized that Dick had actually thought hard and prayed over our spoofy idea, in a process I would come to know as Ignatian discernment. Dick could have just said no and moved on to the next problem. But Dick practiced reflection, that most essential element of Ignatian leadership.

Since his retirement in 2006, Dick remained a stalwart supporter of Jesuit, and especially our students, whom he loved so well. It is appropriate that our Student Center, whose stunning remodel is about to be unveiled, is named for Mr. Gedrose. 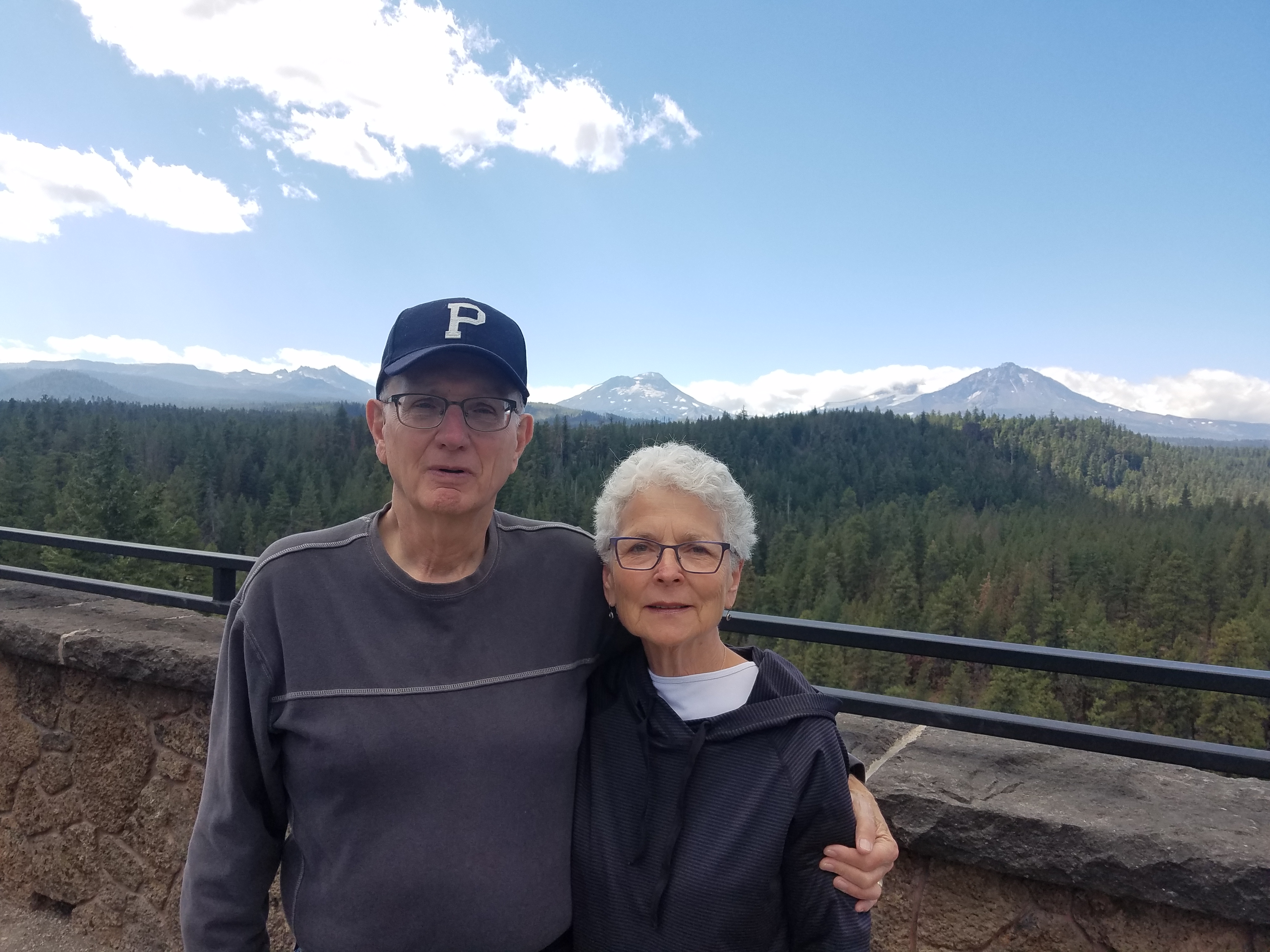 On July 15, 2021, as he returned home for hospice to be with his family and beloved wife Gloria, Dick emailed me, “The Jesuit family has been such an important part of our lives. Now its support continues to sustain us. Prayers and wishes as you plan for the 2021-22 school year…”

That is Dick Gedrose in a nutshell. Even as he prepared to say goodbye to his beloved family and friends, Dick remained devoted to Jesuit High School. When Dick said he would pray for us, I knew he meant it—and that those prayers would be heard.

Now, Dick rests in Christ’s peace, with direct access to his Maker. It is comforting to think of his spirit infusing our hallways and ballfields as students return for the 2021-22 school year, knowing that Dick prays for all of them and all of us, still and forever. This great teacher’s influence is indeed eternal.