One of the great blessings that Jesuit High enjoys is our relationship with the rest of the Jesuit universe. I am writing this blog on an airplane home from New Orleans, where for the past four days I attended the annual conference of the principals of the 84 Jesuit middle and high schools throughout the US and Canada.

At our meetings, we learn from educational and spiritual experts, share best practices, pray and laugh and attend Mass together. I always returned energized and inspired by the myriad ways that the Jesuit mission comes to life in Rochester and Tampa and St. Louis and Cleveland and San Francisco.

Our principals’ conference is just one thread in the remarkable Jesuit tapestry. At a September meeting of the leaders of the Jesuit works in the West, including parishes, JVC, universities, spirituality centers, schools, and universities, Provincial Father Scott Santarosa, S.J., asked us to join forces and “flex our Jesuit muscles” in advocating for social change on behalf of those who have no voice and too little political, economic, or social “muscle.” See this article from the Jesuits West magazine for more on that gathering. 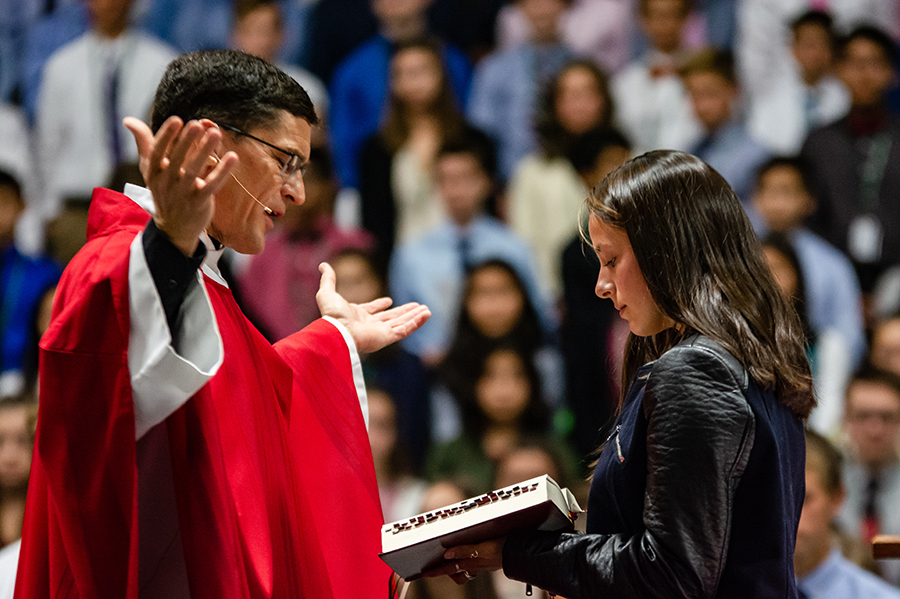 Last Friday (the same day Fr. Santarosa celebrated Mass with us), twenty-five JHS students and four teachers journeyed to Washington, D.C., for the Ignatian Teach-in for Justice. Our delegation joined students from US Jesuit schools and universities, to learn how to advocate on behalf of those on the margins of our world. At the Teach-in, some JHS students who had journeyed to Instituto Ciencias, a Jesuit high school in Guadalajara, ran into our friend Jose Carlos Crocker, the Director of Ciencias, with whom we have developed a friendship and robust exchange program. It is actually a pretty small Jesuit universe.

On, Monday, November 18, the Teach-in crew fanned out across Capitol Hill to advocate and learn to be “contemplatives in action,” as Jesuits have been called for the over four centuries. At the US Capitol, a group of JHS and St. Andrew Nativity students met with Senator Ron Wyden and US Representatives Suzanne Bonamici (pictured above) and Earl Blumenauer (pictured below) to advocate for ecological justice and humane immigration reform. This Friday, November 23, a group of students will journey to Senator Ron Wyden’s Portland office.

On campus, the crosses lining Mary’s Way are a stark reminder of the sacrifices of some Jesuits who have lost their lives for living in solidarity with those on the margins of the world. The original Man for Others, as Father-General Pedro Arrupe, S.J. reminded us in 1973, was Jesus Christ. The crosses each represent a Jesuit who has given his life for a “faith that does justice” as martyrs since 1975, when Fr. Arrupe called on all Jesuits to live on behalf of the poor, as Jesus did. There are seven crosses for women working with the Society of Jesus, and 57 crosses for martyred Jesuits.

The latest Jesuit to give his life for the Gospel was Fr. Victor-Luke Odhiambo, S.J. in South Sudan on November 15, 2018, during an attack by local militants on the Jesuit residence where he lived. At the time of his death, he was the Principal of Mazzolari Teachers’ College. "Father Victor Luke Odhiambo leaves a name, not only in South Sudan as the first Jesuit to die at the service of its people, but in the whole of Eastern Africa as a teacher of thousands of students," wrote Father General Arturo Sosa, SJ. "He was a very courageous man, an intelligent, caring, creative administrator, and above all a believer in the value of education. He was not afraid of venturing into the unknown, even into the most dangerous of places, once he was convinced it was the Lord’s mission."

Later this week, we will host the members of a “Jesuits West Visiting Team” for three days. Our visitors, all of whom work in other Jesuit schools in our Province, are here to see how we pursue the “Jesuit, Catholic” part of our mission in a process called “Sponsorship Review.” Our guests will visit classes, speak with teachers, students, parents, and administrators, and seek to affirm that we are indeed teaching students to be people of competence, conscience, and compassion, and men and women for others. We expect them to be just as impressed with our students as we are.

We also hope our visitors will help us discern the ways that we can improve as a Catholic school. At the end of their visit, the Visiting Team will share with us what they have found. Our hope and goal is that in December, Fr. Scott Santarosa will write a letter affirming that we are in fact a healthy, mission-focused Jesuit school, deserving of the Sponsorship of the Society of Jesus, and those martyrs whose crosses line Mary’s Way. Assuming the answer is yes, we get to keep calling ourselves “Jesuit High School”—a deep and abiding honor indeed, and one we strive every day to deserve.