Principal's Blog: 'Ruined for Life'
Aug 27 2019 11:15 AM
Share to FacebookShare to TwitterShare to Google+Share to LinkedInShare to PinterestShare to EmailPrint this page

As a marketing slogan, "ruined for life" would likely not pass muster at Wieden + Kennedy—unless those famous Portland creatives understand the blend of ironic humor and faith-in-action ethos of the unofficial motto of the Jesuit Volunteer Corps (JVC).

As members of the Class of 2019 sang the final verse of "Lead Me, Lord" at Godspeed Mass on August 7, the JVC's cryptic motto flashed in my brain. The FJV (former JVs) in the Jesuit High community are not the only ones who have been "ruined for life": so too, I believe, are the members of our most recent graduating class as they head off with so much joy and promise.

Lest this notion worry our newest families, let me explain: JVs, most of them fresh out of college, devote a year or two to serving in marginalized communities and living on a very modest stipend in an intentional community (meaning they cook and pray and reflect on their service together).

It's a very Jesuit thing, as these energetic and faith-filled young people live out the ideal that also lies at the heart of the JHS mission statement: "to serve God and our fellow men and women through a profound sense of justice founded in love."

JVs live according to four core values: spirituality, community, simple living, and social and ecological justice. Jesuit Volunteers internalize these values in much the same way that we ask our students to embrace the JHS mission—through education, conversation, communal and individual prayer, service, and reflection.

What does it mean to be "ruined for life"? A person who has been fully immersed in a Jesuit "formation" program—a Jesuit school, the JVC, SEEL (Spiritual Exercises in Everyday Life)—should be transformed by that experience. Having drunk deeply of Ignatian spirituality, one should never again be able to encounter injustice without speaking up or acting to confront it.

Those who view the world through an Ignatian lens cannot abide in comfort while others go without. Jesuit-educated folks should know what poverty looks and smells and tastes like, what life is like for those with disabilities, what Pope Francis means when he asks that our Church serve as a "field hospital" for those broken by the world.

JVs, and our alums, are "ruined," because they know, to quote Dr. King, that "no one is free until we are all free." That makes it hard to walk past the forgotten ones.

To put it another way, JVs, and we hope, our students, take Jesus Christ at His word: "I have come to preach good news to the poor. My father has sent me to proclaim release to the captives and recovery of sight to the blind, to set free the oppressed." Jesuit Volunteers offer to serve as His hands and eyes and mouth in the world.

When it comes to our graduates, we expect that they too will not remain silent in the face of injustice. They will interrupt racist or sexist or homophobic comments, whether in their dorm rooms or online. As they mature, we hope they come to see that the true purpose of their lives is to serve others. Over the decades, I have seen countless Jesuit alums discern how to use the gifts that God has bestowed on them to serve the world's great needs.

This all sounds very serious—and it is, of course. But let's remember the ironic humor embedded in the phrase "ruined for life." JVs don't take themselves too seriously, and they know that to be "ruined" is actually to be saved. 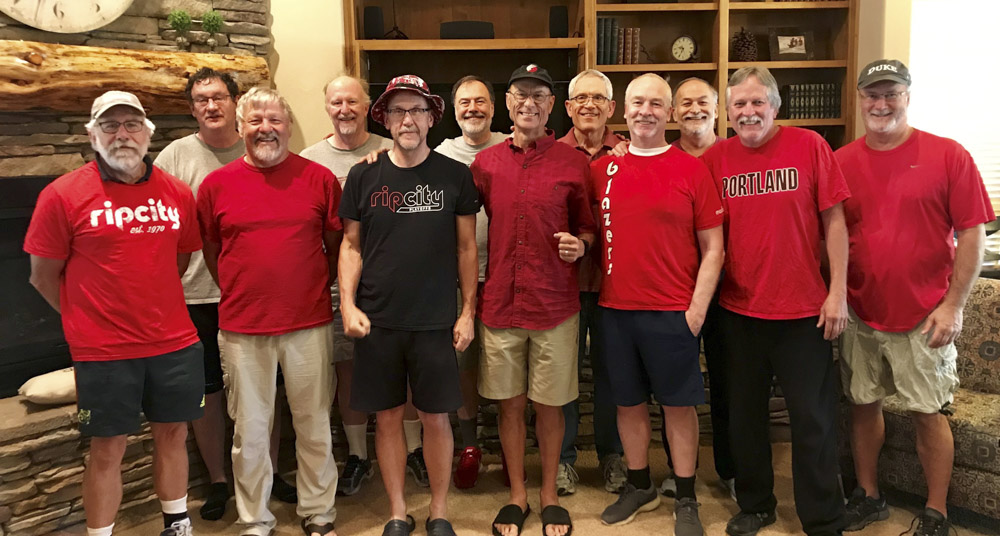 Above: FJV hoopsters and friends, ruined for life.

For the past 22 years, I have been playing basketball on Monday nights with a number of former JVs, many of whom have now hit retirement age. The core group met as members of JVC Northwest and started playing hoops at St. Andrew parish 44 years ago. A deep well of joy, love and humor permeates this motley crew.

The majority of these hoopsters, led by "commissioner" Pat Maguire (37 years a teacher and administrator at Edison High School), have spent their professional careers in non-profits or otherwise serving others.

Among them are educators and judges, an attorney for Native American tribes, a farmer and a counselor, small businessmen, doctors and social workers. They are among the best men I know, despite (or because!) having been "ruined for life," long ago, by their encounters with the Jesuits and with those living on the margins of Portland.

For more on the JVC, see below. You could also talk to FJVs like Mr. Powers, Ms. O'Mahony, or Mr. Tom Manning, who met his wife Sheila, a fellow JV, in Alaska while in their JVC year. So, JHS parents, sorry to tell you that your kids are on the road to ruination. Here's to that, and to 2019-20!