Jesuit Students Say Farewell to Food Waste
Mar 6 2020 3:06 PM
Share to FacebookShare to TwitterShare to LinkedInShare to PinterestShare to EmailPrint this page

During the season of Lent, Jesuit students are fasting from food waste.

The Jesuit High School Green Team is leading a new composting initiative in the Gedrose Student Center to build awareness in the community about food waste and its impact on climate change.

"Food waste collection on campus has been a goal of ours for over a decade," says Jennie Kuenz, Associate Director of Ecological Justice and Global Networking. Kuenz leads the Jesuit Green Team and the Faculty/Staff Sustainability Committee, and they have been preparing all year for the Food Waste Challenge. "Every year we do a trash audit and this year we also did a recycling audit, which measured the amount of contamination in our recycling. By volume, compostable food scraps comprise 7% of our waste and by weight, 40%," says Kuenz.

The Lenten Food Waste Fast Challenge is part of a larger initiative called the Ignatian Carbon Challenge, created by the Ignatian Solidarity Network (ISN). High schools around the country can unite with one another to respond to today's environmental crisis and Pope Francis' call to be responsible stewards of creation: "Whenever food is thrown out it is as if it were stolen from the poor."

ISN emphasizes participation in activities that reduce food waste as one of the most effective and simple ways for individuals to come together and counteract climate change. According to the EPA, 94% of food thrown away in the U.S. ends up in landfills versus being composted. Food waste that decomposes in landfills releases methane, a greenhouse gas that is at least 28 times more potent than carbon dioxide (Washington Post). ISN cites that reducing food waste could have nearly the same impact on reducing emissions over the next 30 years as onshore wind turbines.

In addition to composting stations, recycling bins will be located in the Gedrose Student Center throughout Lent, and Jesuit Green Team ambassadors will show their peers how to use the various stations. Current recycling programs for items that are not recyclable curbside, such as plastic film, contact lens cases, and snack pouches, will continue. "Reducing waste and keeping things out of the garbage is one of our goals as we continue to strive for zero waste on campus," says Kuenz.

For more information about Ecological Justice at Jesuit, visit our website here. 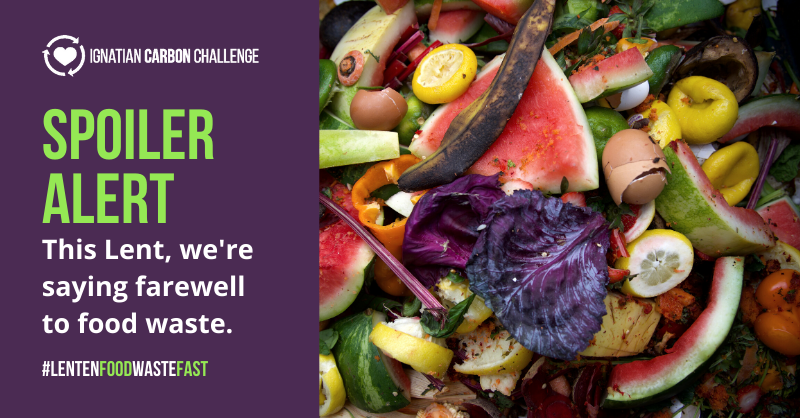