Jesuit High School Presents 'WORKING'
Apr 29 2021 2:05 PM
Share to FacebookShare to TwitterShare to Google+Share to LinkedInShare to PinterestShare to EmailPrint this page 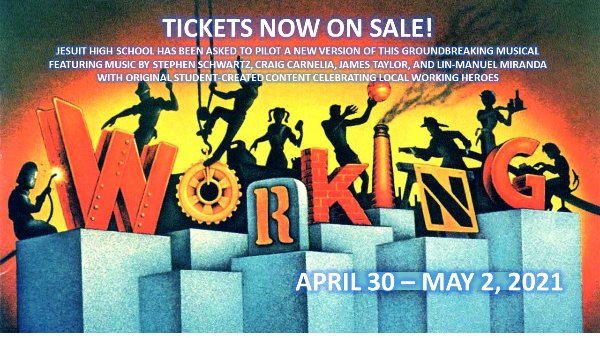 The Jesuit High School Theatre Program continues working to keep live theatre alive through this most unusual school year with a new version of the Broadway Musical WORKING, streaming live from the the Marilyn Moyer Theatre this weekend only!

Based on the book of interviews and essays by Chicago journalist Studs Terkel in the 1970's, and featuring music by some of Broadway's hottest composers, WORKING has evolved throughout its nearly 45-year history, periodically adding new characters and musical numbers. Most notably, Lin-Manuel Miranda added songs for the show's revival in 2012.

This new localized version is designed to make the show a living, breathing document of what it means to join the American workforce in the 21st century. Jesuit students conducted dozens of interviews with local workers throughout the Portland area, and – joining some of the musical's familiar characters – this weekend's performances will feature new characters based on real people with jobs at local sites such as Parr Lumber, Nike, Wieden+Kennedy, Zupans, Blanchet House, and Dove Lewis Animal Hospital.

Contemporary versions of some of the musical's staple characters are also portrayed, using the local subjects' real words. This adds a specific and timely touch in a year when Covid-19 has changed our relationship to daily routines, family life, school, and work.