Anne Frank Today: Jesuit Students Share Her Story
Mar 11 2020 11:37 AM
Share to FacebookShare to TwitterShare to LinkedInShare to PinterestShare to EmailPrint this page 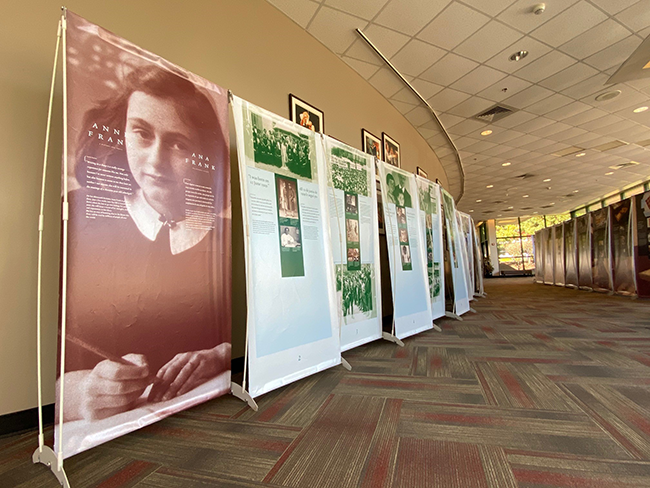 Jesuit is one of only three high schools in the Portland area to host the Anne Frank House special exhibition: Anne Frank - A History for Today.

The pop-up exhibition travels around the world to share the story of Anne's life and generate more awareness for students, parents, and educators about the Holocaust and human rights. Jesuit worked with the Consulate General of the Netherlands in San Francisco to coordinate participation in the exhibit's West Coast Tour. Parent DJ van Hameren, Honorary Consul of the Netherlands in Portland, was instrumental in the coordination of the exhibit.

"This is a once-in-a-lifetime opportunity for our students," says Jennie Kuenz, Associate Director of Ecological Justice and Global Networking. "By interweaving the historical context of the time through peer-guided storytelling, the exhibit compels students to view Anne's life and story with a new perspective."

"Having peer guides really makes a difference because it's teenagers talking to teenagers about teenagers. I think that makes it easier to ask questions," says sophomore Vanessa Auth, who leads four classroom tours. "Anne's story connects so many people. Many students have read Anne Frank's diary in middle school or recently at Jesuit. Adults who come to the exhibit may have read the book too, but they will remember life as a teenager and reflect in a different way."

At least 600 students, faculty, and staff will tour the exhibition this week and reflect on the core themes of human dignity, inclusion, and mutual respect. "Anne's story is especially impactful because there's not a lot of political bias. She was a teenager who wrote about the things that were happening to her, so it builds greater understanding between different generations and experiences," says Auth.

Set in chronological order, 30 panels of photographs tell the story of Anne's life. Each unique panel shows her experiences against the backdrop of the Nazis coming into power and the "larger history" of the concentration campus and the Holocaust. At the end of the exhibit, the focus transitions to human rights today.

"She is no longer just a character in a book. She is real, and it is impossible to ignore what happened to her and others during the Holocaust and what is happening to other persecuted individuals today," adds Kuenz.

The exhibition coincides with Jesuit's Multicultural Week. This year's theme, "We the Youth: Advocacy in Action," strives to empower the next generation of leaders to explore their voice and collective contributions to our world's challenges and opportunities for growth.

Next week the exhibit will travel to Central Catholic High School and culminate with a special event at the Portland Art Museum to celebrate the collaboration between the Anne Frank House and local high schools. Jesuit student peer guides, faculty exhibit liaisons, and administrators will meet Gerbert Kunst, Consul General of the Netherlands, as well as representatives from the Oregon Consular Corps, board members of the Dutch Portland Society and Dutch School 'de brug'. They will also be joined by Mayor of Portland Ted Wheeler and Governor Kate Brown.

Anne Frank - A History for Today will be on exhibition in Jesuit's Alex L. Parks Performing Arts Center lobby this week (March 9-13) and open to visitors during school hours.