A Good Sport
Jul 1 2019 10:16 AM
Share to FacebookShare to TwitterShare to Google+Share to LinkedInShare to PinterestShare to EmailPrint this page 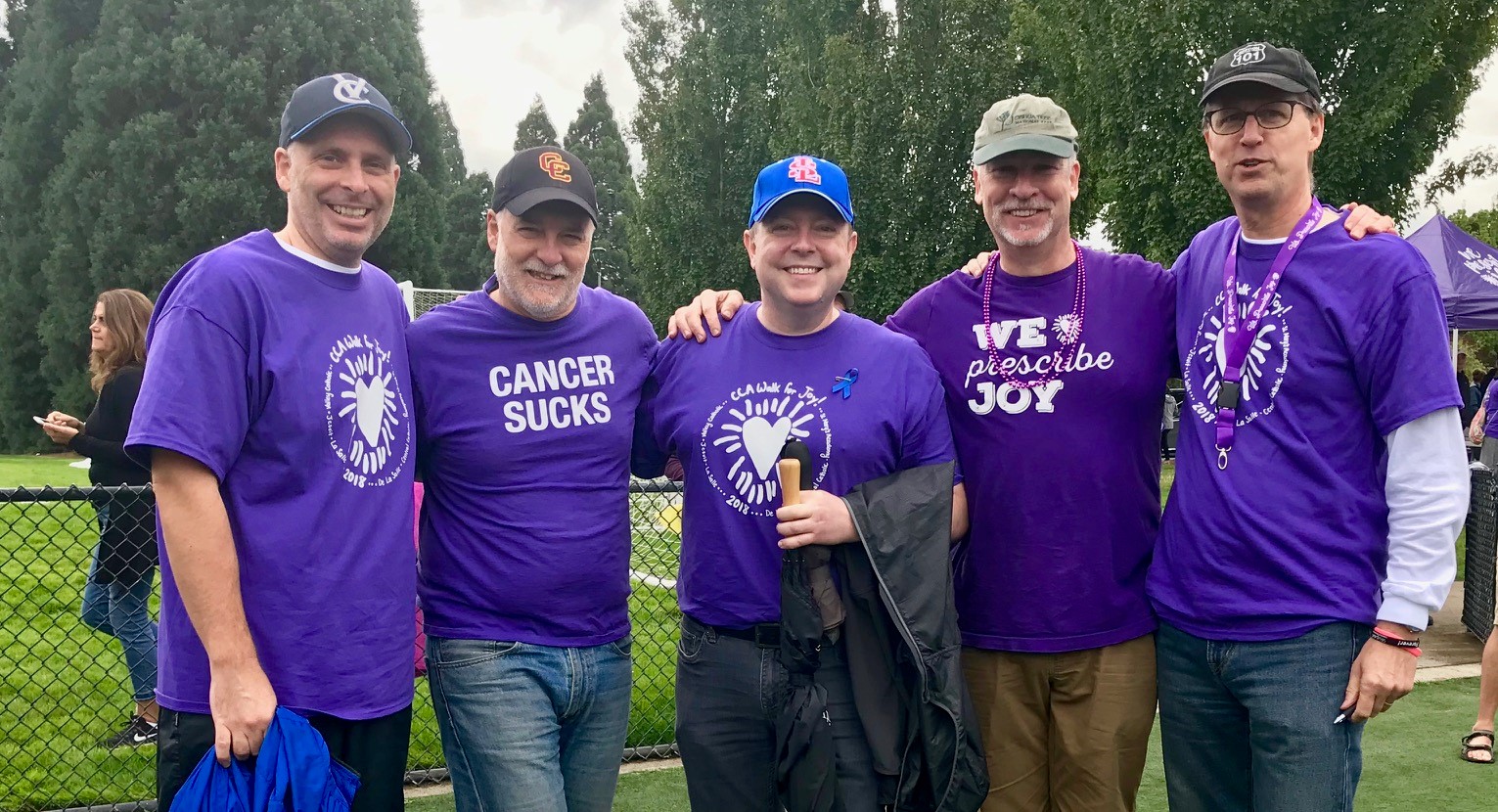 I love serving as Principal of Jesuit for a lot of reasons, most of them connected to our students, alums, parents, and our remarkable faculty and staff. One of the most surprising blessings of my job, however, comes from a source that I would not necessarily have expected when I took this job back in 2012: My friendship with the other Catholic high school principals, especially my good friend John Garrow, who just retired from Central Catholic after a decade of superb service to CC, and a forty-year career as an educator.

A recent issue of the Catholic Sentinel captures the flavor of our friendship: PrinciPALS.

While this article focuses on John and me, I want to point out from the outset that the other principals in town, as well as Stacey Baker of Marist, have contributed tremendously to the current spirit of collaboration that exists among the Catholic high schools of the Archdiocese. Stacey and Doug Ierardi of Valley Catholic have served as the formal Chairs of our group; Andy Kuffner of LaSalle hosted the first professional development day for all of our schools in September of 2017 and was the first to successfully implement the Digital Learning Days we cooked up in the winter of 2016. 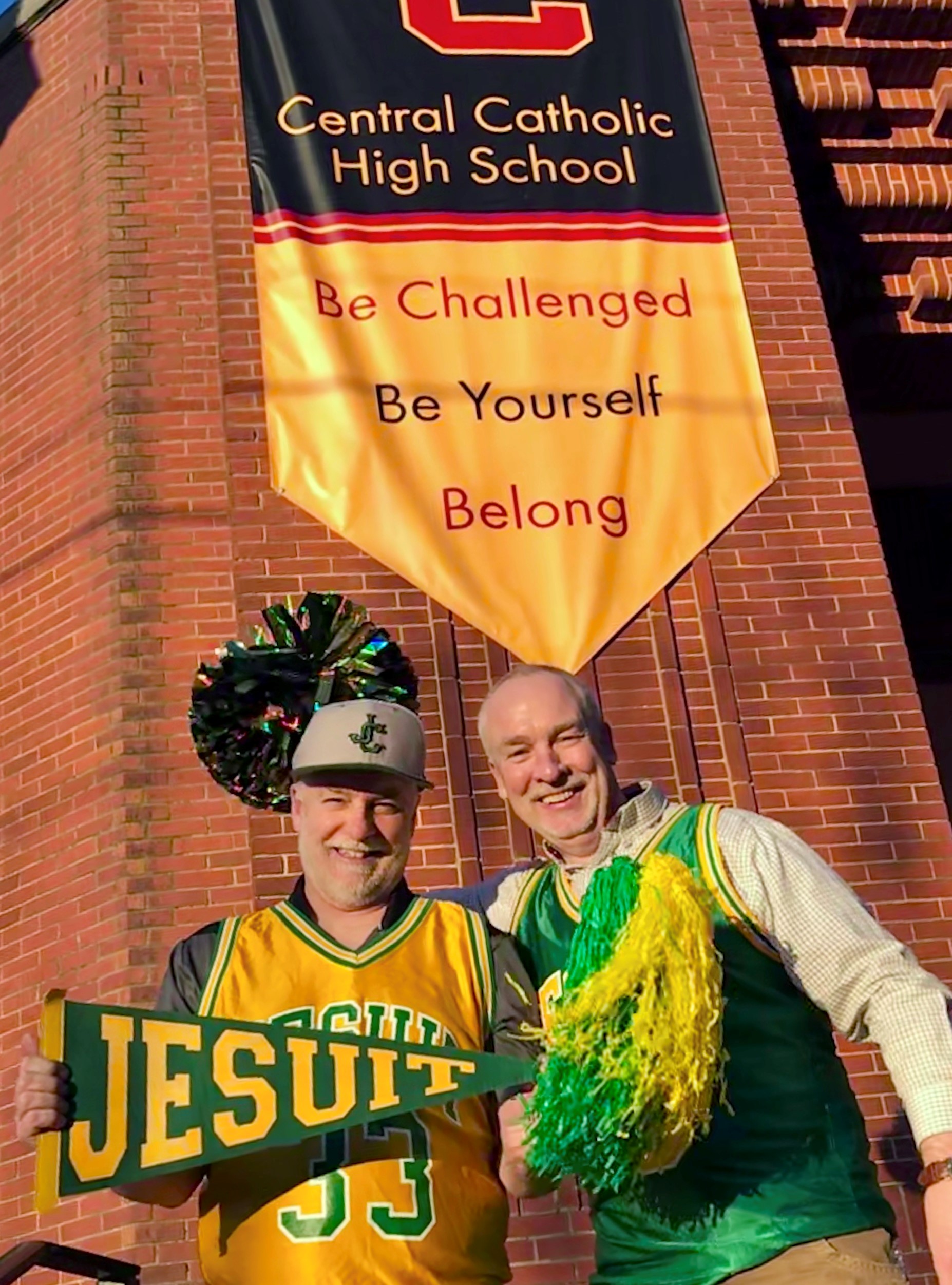 Kelli Clark and Nicole Foran, the former and current principals of St. Mary's Academy, have been essential conveners and idea-incubators, and of course, Tim Joy of De La Salle North is doing heroic work, bringing both hope and real opportunity to our brothers and sisters in North Portland. We are all good pals these days, and our schools and the city of Portland are better for it.

But as Ed Langlois intimates in his Sentinel article, John and I have forged a special bond—and not only because of our two schools' propensity for meeting in high stakes athletic matches. (And yes, that is John wearing Jesuit gear in the photo to the right. He may have lost a bet in the spring of 2019... Thus the title of this blog!).

John and I connected not only through the Walk and Mass for Joy for the Children's Cancer Association, which for the past four years has featured a kick-off fundraiser at the Jesuit-Central football game. We have also relied on each other when each school has experienced tragedy, and when trying to figure out how to meet the needs of the increasing number of Catholic school students with diagnosed learning differences (one of John's areas of particular expertise).

We share best practices and war stories, and try to remember that our two schools—indeed all Catholic schools—are on the same mission, even when our staff members "jump ship" and head to the other side of the river (yes, John, I forgive you for hiring away from Jesuit the terrific David Blue, JHS '91, to be your first Director of Diversity and men's basketball coach!).

John's tenure at Central will be remembered for the many ways he advanced Central's academic, athletic, and artistic programs, as well as his focus on service and ministry at the heart of CC's mission. Perhaps John's greatest legacy, however, will be the RAMS program, through which the school serves students with developmental disabilities. As John says, and as I have personally witnessed, the RAMS programs has transformed not only the lives of those students, but ALL of the students who are graced by the presence of the RAMS kids at their school.

So, as my good friend John enjoys the fruits of a long and successful career as an educator in both Portland's public and Catholic school system, let us all raise a toast to this remarkable leader, educator, man of faith and good sport: Slainte, John, and Godspeed you on your retirement adventures.