Principal's Blog: 21 Days, 10,000 Actions
Oct 23 2020 2:08 PM
Share to FacebookShare to TwitterShare to Google+Share to LinkedInShare to PinterestShare to EmailPrint this page 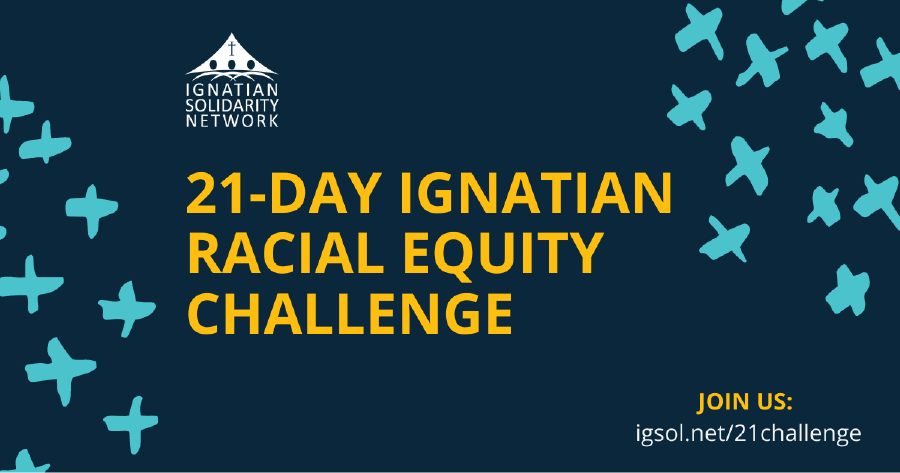 In 2020, it is tempting to shrug and say, "Well, there's nothing we can do about... [COVID-19, systemic racism, climate change, sexism in the workplace, growing inequities in our culture, the election, the teen mental health crisis]."

But the thing is, there is. This is a blog about hope. All of us, working together, can combat systemic racism and sexism. As a white, upper-middle-class male, I don't know what it means to be a person of color or a woman. I do understand the systemic privileges afforded me, the doors opened, the access offered.

So, I will try to make my case with humility, knowing I am wading into deep waters here. (Another metaphor: Rarely has my keyboard felt so like eggshells!)

Still: In my 24 years as an administrator at Jesuit High, I have witnessed systemic changes in Jesuit education that have empowered women and expanded opportunities to students of color. By engaging in that process, I have learned and changed and grown.

What I have witnessed gives me hope, and inspires me to shout from the rooftops about this month's Ignatian Teach-in for Justice, the Ignatian Solidarity Network's 21-Day Racial Equity Challenge, and the Jesuits West Collaborative Organizing for Racial Equity (CORE).

When people in Jesuit institutions put their collective minds and hearts and souls to initiatives like these, we have the collective power to create change that transforms the lives of young people. I am here to testify, because I have seen it with my own eyes.

When I came to Jesuit High, the school was in transition from an all-male to a coeducational institution. In 1994-95, my 6th period English IV class had 25 boys and one girl in it—and I can tell you, Jill was tough. She had to be.

Another tough and tenacious woman was our Academic Vice Principal at the time, Sandy Satterberg. Sandy was also a gifted teacher of Calculus and a systems thinker. But did Sandy know she would become a latter-day Archimedes ("Give me a lever long enough and a fulcrum on which to place it, and I shall move the world.")? That fulcrum turned out to be Jesuit High School, the lever Sandy's three decades of brilliance as an Ignatian leader.

In 1997, Sandy became Jesuit's Principal—the first lay woman to serve in that role in the 200-year history of Jesuit schools in the United States. I had the privilege of serving as Sandy's Academic Vice Principal. For the next 15 years, I had a front-row seat to a seismic change in American Jesuit schools. Once Sandy demonstrated that, of course, a capable, caring woman could run a Jesuit school, and take it to new heights, the Jesuit universe woke up. 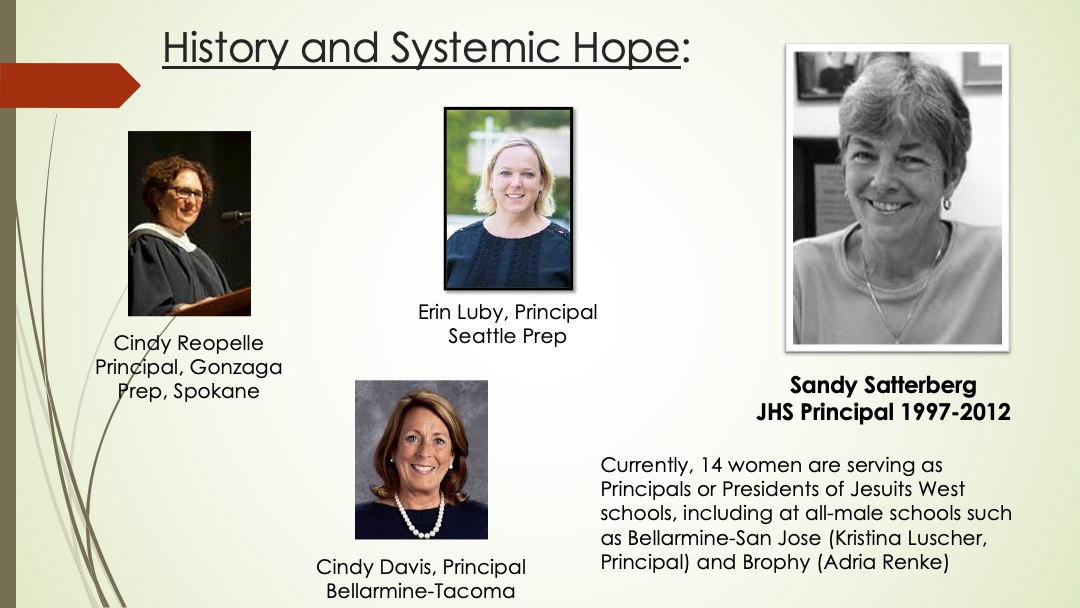 What does female empowerment look like? Today, 14 women serve as Principals or Presidents of the 20 schools in Jesuits West Province. The three other high schools in the Northwest are led by female principals (Gonzaga, Bellarmine-Tacoma, Seattle Prep), as are St. Andrew Nativity and St. Ignatius, the other two Jesuit schools in Portland. All-male schools such as Bellarmine-San Jose and Brophy Prep in Phoenix have women leaders. That is systemic change, and it has real, lasting impact—not only on the young women with such powerful role models, but also on the young men who likewise benefit from their leadership and example.

That doesn't mean systemic sexism is no longer present in Jesuit schools. But Sandy's impact at Jesuit, in the Province, and the US, was real, and lasting, and will not be reversed. Sandy pushed the lever. The world has moved, and it ain't a-going back.

When I became Academic VP in 1997, there were nine schools in what is now Jesuits West. Jesuit High's student body was 85% white. We knew that we must do more to prepare all of our students—at Jesuit, and throughout the West—for a multicultural new millennium. So, we made plans, created programs, hired great people, and reached out to terrific students throughout the region. Now, Jesuit is comprised of 42% students of color, making our educational programs much richer for all of our students.

There are 20 schools in Jesuits West, including five Nativity-model middle schools, all of which serve primarily students of color and offer their amazing students a pathway to a college-prep high school, college, and a life that they can design.

Jesuits West has also founded four Cristo Rey high schools. Since I became AVP, 37 Cristo Rey schools have come to life, serving 12,000 students per year—all low income, but with high aspirations and real dreams. CR students gain real-world work experience, go to college, and transform the world with their ardor and intellect and passion and compassion.

Serving underrepresented communities leads to some systemic change. But it is the inclusion of female students and leaders at Jesuit, and of students of color and leaders of color in our schools, that really makes the difference—for all students. JHS boys learned from Jill and her friends, and from Sandy, how to respect and admire and compete with and befriend and be in solidarity with women.

These four members of the Class of 2019 all have the last name Williams! From left to right at their graduation: Aiden, Grace, Jayla, and Maya.

Similarly, all of our students, especially our white students, have to grapple with how power and privilege work in American culture. We challenge them to be co-liberators, of themselves and their friends. As Dr. King famously stated, "None of us are free unless all of us are free." Dr. King also reminded us that liberation is the great mission of Jesus Christ, as He tells us in Luke 4:18. Liberation of those who have been historically oppressed is also therefore the mission of the Society that takes the name of Jesus, and the Society's schools.

What I have witnessed since 1997 have been deliberate, hard-fought, incremental changes to systems that have historically placed barriers in front of women and people of color seeking to fulfill their God-given potential. These programs were born of discernment and prayer, but they succeeded because of grit and hard work and generous souls and deep faith.

Of course, by pointing to inspiring examples like Sandy and Anthony, we cannot overlook the fact that it is still enormously challenging to be female or a person of color in our society, and in the schools of the Society of Jesus. But we can all make a difference, and both Jesus and the signs of the times demand of us that we try.

What can you do to contribute to systemic change? How can you be committed to actually doing justice? To start, heed the words of Jesuit's Director of Diversity, Equity, and Inclusion Melissa Lowery, then take the 21-Day Challenge, or complete an Action toward Racial Justice:

"In our continuing efforts towards becoming a more culturally aware and anti-racist community and in conjunction with CORE's initiative of taking 10,000 Actions, we invite you to join us in the 21-Day Racial Equity Challenge, starting November 2. Watch this video to hear some of the small steps that folks at Jesuit High will take, which will help contribute to a significant leap for Jesuits West.

Together for 21 days, our community will learn, pray, and understand the realities of racial injustice and anti-Blackness in the U.S. The Ignatian Racial Equity Challenge is designed for all participants, regardless of race, ethnicity, prior anti-racism work, age or background."

The need for racial justice work in the lives of individuals and the Church was made crystal clear in the US Conference of Catholic Bishops' 2018 Pastoral Letter, "Open Wide Our Hearts."

ISN (Ignatian Solidarity Network) hopes that the challenge will provide a way for people to begin or continue the process of anti-racism in their lives and communities by exploring racial equity in light of our faith and Ignatian Spirituality.

How The 21-Day Challenge works:

You will receive a daily email from ISN with a challenge, starting November 2 and every day after that until November 22. Each email will consist of a topic with specific context, opportunities to reflect/pray and opportunities to act. Work at your own pace; the goal is to do an action a day.

With students, staff, parents, faculty, board members, and alums across the 80+ Jesuit schools in the US and Canada, we will make a mighty push on the levers of justice, so that we may indeed lift this broken world into the streaming light of God's Kingdom. Will you join us?