Twenty-five years ago, the course of Jesuit’s legacy was permanently changed for the better when the school opened its doors to 260 pioneering young women on a beautiful September 1 morning in 1993. After nearly four decades as an all-male institution, the voices of young men and women filled the classrooms and bubbled into the halls—a full chorus of sounds hinting at the bright future ahead.

Now a quarter-century later, Jesuit High School is a pillar of faith and education in the Portland-metro community, offering the opportunity of Ignatian learning to all young people.

“This single step of coeducation, which required years of discernment and careful planning, was the most transformational event in the history of Jesuit and the catalyst for a complete renaissance of our school,” says Jesuit President Thomas Arndorfer. “Of course, this historical milestone wouldn’t have been possible without the visionary leadership of Fr. William Hayes, SJ.”

Hayes recognized the demand for a Jesuit school that would prepare the future leaders of the world, both women and men.

“I would hear from parents, why can’t my daughter receive the same education my son is receiving?” remarked Hayes in an interview he gave in 2012. “Coeducation has been a Godsend for the school because of the talent and the creativity and the spirit that young women bring.”

“Jesuit still has the same foundation it had as a school for young men, but coeducation made that foundation much stronger,” says former Principal Sandy Satterberg, who helped oversee the transition. “When you simply think about the thousand students who attend a voluntary Mass every Friday, whether they are Catholic or not, it is easy to envision the impact that has had and will continue to have on our world.”

Throughout the 2018-19 academic year, Jesuit will celebrate its 25th anniversary of coeducation at events like its annual Welcome Back Assembly and Alumni Weekend (Sept. 13-15), as well as special events such as the 2018 Jesuit Hall of Fame Induction Ceremony (Sept. 14) and Women’s Leadership Summit (March 16). On October 10, the school will host three notable alumnae as keynote speakers for its Financial Aid Luncheon, “Celebrating Three Decades of Coeducation” – the Honorable Kate S. O’Scannlain ’95, U.S. Labor Solicitor, Anarghya Vardhana ‘06, named a Forbes “30 Under 30” for venture capital, and Chrisleine Temple ‘15, a senior at Williams College. 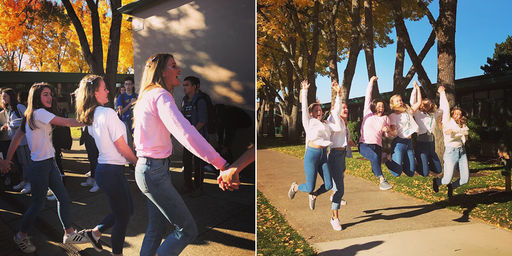 As we celebrate 25 years of coeducation at Jesuit High, we recognize and give thanks for the thousands of women-for-others who have graced our campus.